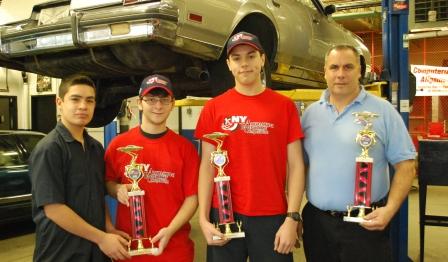 Wilson Tech seniors (l. to r.) Jon Santana of Kings Park won first place in regional competition as the team’s alternate; Matthew Uricchio and Kevin Donaldson of Smithtown West won $36,500 in scholarships for first place in regional GNYADA auto competition; Ralph Savarese won trophy for winning instructor.
For the seventh time in the past nine years, two Wilson Tech students won first place and $36,500 in scholarships at the regional automotive competition sponsored by the Greater New York Auto Dealers Association. Kevin Donaldson and Matthew Uricchio, the winning team, are seniors who attend Tech’s automotive technology program in Northport for half the day and Smithtown West High School for the other half.

The students, as well as three other Tech teams, had 1½ hours to troubleshoot and then repair problems that could have been anything from inadequate tire pressure to an electrical malfunction on several new model automobiles. The winning team will continue practicing their troubleshooting skills with their Tech teachers at a local dealership in preparation for the New York State competition that will be held at the GNYADA Training Center in Whitestone on Feb. 11. To determine which car will be used at this contest, Ralph Savarese, the Tech teacher of the winning students, drew an envelope out of a hat. The students now have a month to prepare for de-bugging a 2014 Toyota Corolla and another opportunity to win more scholarships and equipment.

This year GNYADA had a side competition for the alternates that each team sends. Tech’s alternate from the school’s Northport campus, Jonathan Santana from Kings Park, won a $25 gift card to Foot Locker and a $2,500 scholarship.